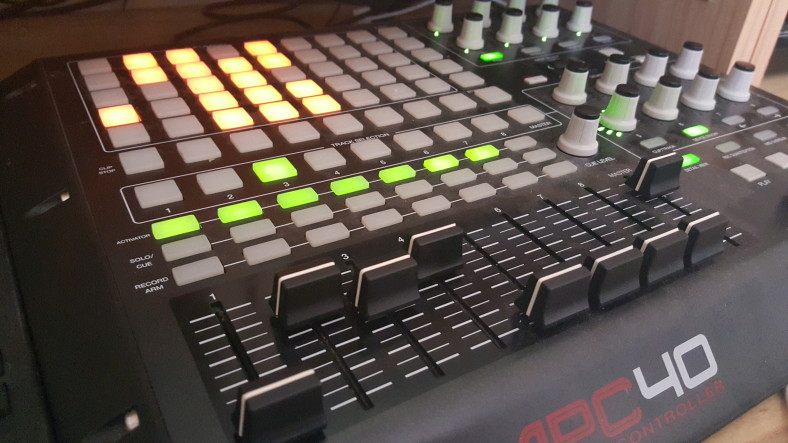 I got into a controller conversation with a friend tonight. He and I have a similar Ableton setup, including Push and the first-gen Akai APC40. Given the new analog synth he was adding to his studio, he and I debated whether he could ditch the APC, and continue using Push only. It definitely got me thinking… thinking I don’t see ever parting with my APC. Here’s why.

Let me start by saying I use my APC for both DJ performance and in-studio production and mixing purposes.

The Hardware Equivalent of Session View

Your hands just know where to go.  A dedicated button for everything you see on screen: clip launching, tracks, effects, and general playback & recording control. Although Push can access nearly every feature (and even more), some of the obvious “mixing” functionalities require deeper levels in the navigation to access. The APC’s console layout just makes for a great piece of studio equipment.

The APC’s track faders are key to DJ performance and mixdown. Yes, Push has the top mounted knobs, but their distance from the pads is very unnatural for me when it comes to managing track volumes. And of course, you’ve got to be switched to Volume mode on Push, as you might be concurrently controlling effect parameters – on a separate track. Like a traditional DJ mixer, I can more easily adjust volume for multiple tracks with one hand, and work effects with the other. Now, the APC40 mkII attempted to take

The layout of the original APC40 is, in my opinion, superior to that of the mkII. By having the rotaries all on the right half of the controller, it remains very logical for me to keep my effects under right-handed control. Clip launching, recording, solo’s and tracking can be achieved with the left hand. Because my DJ set typically consists of 4 channels, I personally map the top 8 Pan rotaries (1+5, 2+6, 3+7, 4+8) for each track, with a Low and High EQ cut dedicated to each of the 4 tracks. [Of course, you’ll need to have the Remote switch enabled in the APC’s Input preferences in order to override the default MIDI mapping.] As for the lower 8 knobs, I have one effect rack (group) per channel, so as long as I don’t jump to the individual effects in the chain, I never get lost.

I’ve already admitted that I don’t use the crossfader anymore. However, there are some really cool tricks that can be accomplished by using it. Check out Jon Hobotech Margulies, who has tons of great Ableton tips and techniques.

Believe me, I’d love to have them, as using only orange and green pads can be super confusing. The ideal controller for me would include the same RGB pads, but retain the layout of the original APC40. I’ll be writing another post to describe my wish list controller.

Sheesh, just get the APCmkII!

No! Well . .maybe one day. I do want to try it, but my mkI has been so good to me, that an upgrade really isn’t necessary. Especially at twice the price! You can find the original APC40 on Amazon for less than $200USD – that is a crazy good price for a piece of studio AND performance gear. The APC40 mkii retails for $399USD, which I suppose is what I paid for my original when it first came out (bundled with Ableton).

I love Push for step sequencing and the chord mode. Right out of the box, I banged out a sweet little groove that would have previously taken me all day to lay down. It’s here – and admittedly nothing special, nor was it properly mixed – but whatever:

Could I use Push for live DJ performance?

This is really the crux of the matter. Today I’d say “maybe.” I’d love to hear from you, actually. I’ve seen some videos with guys using it on stage (often via Ableton.com), but for the most part, they are performing it like an instrument, maybe launching pre-prepared loops on occasion. Or, they’re building a track from the ground up, on the fly. Which I love, but I do that in my home studio – not in front of a crowd.

If you do use Push in the club, how are you handling transitions with only one row of rotaries, and no crossfader or track gain? Seems complicated and limiting.

My buddy was able to remove the APC from his setup, as he’s figured out how to make the Push work for his workflow. For now, both devices will sit side-by-side in my studio, and unless someone can convince me otherwise, I’ll continue to take the APC on the road.

« How I Mash Up – Part 2 Better Ableton Mixes: Utility Gain »