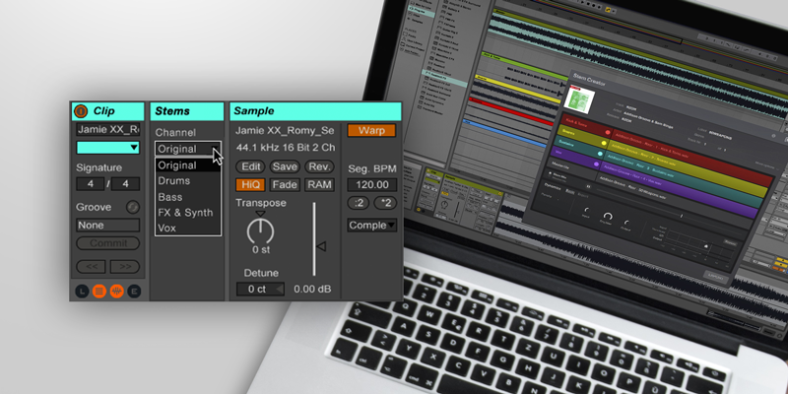 Yesterday I received an email from Native Instruments suggesting I download and try their free STEM Creator tool (ironically[?] showing Ableton on the screen). After watching their YouTube video, I got to thinking, do I even need this? The truth is, I really don’t. I produce my tracks in Ableton, and if I need to bounce isolated track stems, that can be easily accomplished from a drop down menu in the Export Audio dialog. Most of us produce in layers anyway, so if I were to ever perform my original productions live (sigh, one day), my elements are already split into independent tracks with associated clips.

However, if I produce my own tracks and intend to publish and share them with NI Traktor users, this creator tool could be quite valuable. Although not truly necessary, I started thinking about how Ableton might be further enhanced by supporting STEM format, and where I see real potential.

For the uninformed, in early 2015 NI announced a new file format for audio tracks known as STEM. The idea is that one single, larger MP4 audio file could contain multiple audio channels embedded inside. Each layer is then playable independent of the original Master (ie., album edit). STEM recently became an available format on Beatport (typically for an additional $1), and these tracks are broken into five base channel components: 1. Master, 2. Drums, 3. Bass, 4. FX & Synth, 5. Vox 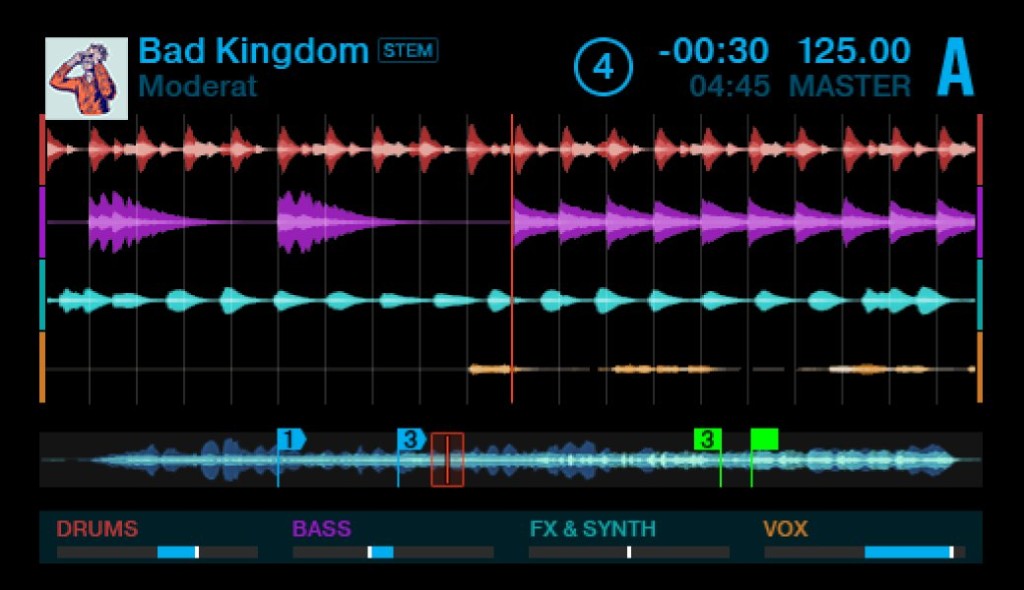 Why these five channels? Well, coincidentally, these map to four hardware buttons in the “remix decks” of Native Instruments Kontrol S-series Traktor DJ controllers. Imagine that. The idea is that when you load the STEM track into a deck of your Traktor session, you’ll have the ability to play the original Master track (as intended by the artist), or remix the song with the track’s four isolated instrument channels. Imagine if you had a 4 track mixer, with all the segments playing in time with each other (or not). Take the drums from one track and mash it with the bass line from another.  Drop the (now acapella) vocals from Deck A with synths from Deck B. Instead of looping various parts of the album master, it offers further performance, juggling and layering potential within Traktor.

How is that any different than using Clips in Ableton?

When I set up my Ableton DJ session, I’m typically cutting my tracks into various clips: an intro loop, a four on the floor, a break, etc. Although I’m only using one track, the challenge with this approach is that Clips behave more like cue points. Isolated loops? Yes, definitely. But clean? Not really. Getting the clips ready for remixing and mashups typically requires some additional EQing or filtering. Not a big deal for a seasoned DJ, but hear me out.

What if there was STEM support for Ableton, and what might that look like? If we check the tools available in the Clip palette / Sample Preview, we already have loads of features for playback, looping, warp modes, transpose, follow actions, etc. What if we introduced a new palette, that appeared when a STEM file was imported / detected?

I did a quick mock up of what that Ableton experience could be, and pushed the following image out to Twitter: 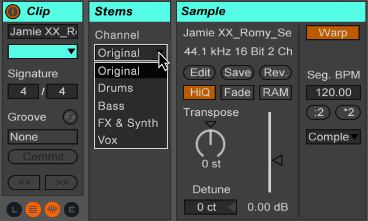 I think this is a decent proposal. It’s clean, logical, and looks native. Within minutes, @KingBritt fired back:

Not only was I honored to catch a tweet from a well-established (Ableton user!) DJ producer, but I was also surprised with his disdain for the new format. And good for him for speaking up! I would agree that in many ways NI is playing catch-up here. Most Ableton users have been slicing and mashing bits for years. But hang on…

What about Hip Hop?

This genre is a classic example where you might have an album version, a radio edit, an acapella and an instrumental (and in many cases, a remix featuring other rappers / artists). Back in the day, if you bought the single on vinyl, it typically came with these other cuts on the b-side.

In today’s digital age, each one of these tracks is a separate purchase. Meaning not only a separate cost, but also a separate asset to store, analyze, categorize, warp, clip, etc. And all of this takes time – time I’d rather be spending mashing tracks together. Would I spend $5 on a single file, if it contained all variations of the original? Hell yes.

Then there are those occasions where I wish I had a radio edit, as some lyrics can certainly be more, well, jarring. You know, DJing a work function, wedding or kids birthday (ha). A simple MIDI-mapped drop down selector could enable this edit on the fly in Ableton. Full disclosure: I love hip hop, and more importantly, I love to mashup hip hop with electronic / deep house beats.

The STEMS catalog on Beatport is pretty limited today. At the time of this post, less than 700 tracks are available. Only time will tell if this new format becomes a permanent fixture in modern DJing. One thing is for sure, next to CDJs (which play only the default Master channel in a STEM), Traktor makes up a huge percentage of today’s DJ market.

Glaring problem though: the labels need to adopt it, too – and it’s been relatively slow to catch on. Outside of CDs and MP3 (and a couple more dollars per purchase), there’s no real incentive for them to make an additional format available. Providing the general public with instrumentals and acapellas would naturally lead to one thing: even more bootlegs and mashups – something labels already struggle to combat.  As for the EDM and House STEM tracks on Beatport, I’m far less excited since I personally prefer to mashup vs remix.

If not native in Ableton 10, STEM support seems like something a Max4Live developer could whip up in a weekend.

STEM support could certainly be implemented in Ableton, and I’d welcome it. Especially in the Hip Hop and Top 40 genres. To have clean, isolated stems for the tracks in my crate could provide me even more flexibility and opportunity – and that’s hard to imagine, given my love for all-things Ableton.

So, are you an Ableton purist, or would you welcome STEM support? Not saying you have to buy STEMs, rather, I’m saying it’s a new and flexible audio file format that we should be able to access all features of. For now, back to warping clips.